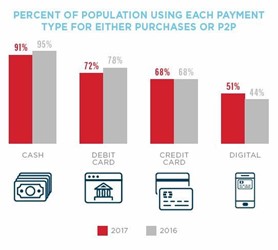 Cash is still one of Americans’ favorite methods of payment for purchases. While it scored behind debit cards in the September 2017 Cardtronics Health of Cash study, cash remains the most commonly used form of payment, with 91% of respondents saying they had used cash in person-to-person payments in the last six months. That’s an uptick from 89% a year earlier.

This compares to 72% of survey respondents who used debit cards, 68% who used credit cards, and 51% who used digital payments such as mobile wallets, P2P apps and retailer apps. “Cash, which notably remains the most commonly used form of payment, continues to play a meaningful and often leading role among the full range of cash, card and digital payment options. Merchants (grocers, convenience stores, pharmacy, small/local businesses, and mass merchants) also prefer cash payments,” according to a NACS blog about the study.

Interestingly, cash wasn’t the preferred form of payment. That distinction went to debit cards, named by 33% as their preference. But cash scored higher (27%) than credit cards (22%), electronic payments (15%) and checks (3%).