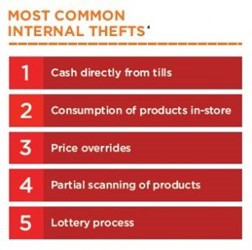 Everyone knows theft is a big problem in retail. Not only do shop owners have to guard against shoplifters and scammers, but the sad reality is retailers also must constantly deal with employee theft.

The Crime Report 2019, recently released by the U.K.’s Association of Convenience Stores (ACS), reveals employee theft cost convenience stores in the kingdom a whopping yearly £20 million, the equivalent of US$25 million. There were 22,754 incidents of staff theft in the past year, at cost of £895($1,135) each, with the most common theft being cash taken directly from tills the report says.

According to the ACS, retailers have invested approximately £5 million to tackle the problem, using a number of methods such as the implementation of in-store best practices, installing new technology and reducing the amount of cash kept in the tills.

The good news is employee theft declined from an average of 13 instances per businesses in 2012 to six per business in 2017. However, only a fraction of incidents (30%) are reported to the police because retailers perceive the thefts as “a failing of their own internal reporting and checking procedures.”

Failure to notify the authorities has wider repercussions, the report points out. “Reporting incidents to the police can also prevent offenders moving to other businesses and committing the same offence.”