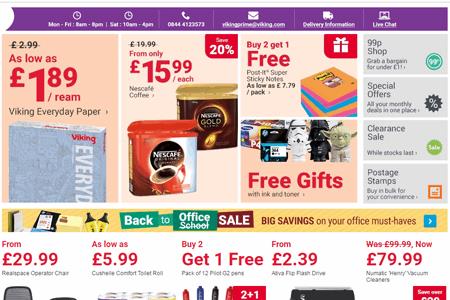 At first glance, Jonathan Newman’s title — international CIO and VP of ecommerce and marketing operations — indicates the guy has a lot on his plate. With a little investigation into the marriage of technology and marketing in modern retail, however, his title makes perfect sense.

Newman serves this seemingly dual capacity at Office Depot, the office supplies and furniture mega-merchant that boasts some 1,800 retail stores, serves consumers and businesses in 57 countries, has a number of e-commerce sites, and has B2B off shoots that generate more than $14 billion in annual revenue.

Newman had been serving Office Depot Europe for nearly two years as VP of e-commerce and marketing operations when the company’s then-CIO departed a little over a year ago. To find the CIO’s replacement, executives at Office Depot thought it instructive to analyze the demand drivers for IT services at the company. E-commerce and marketing were the far-and-away front-runners. “Given that the bulk of the company’s demand for IT resources was coming from my area, I was tapped on the shoulder to assume the CIO role,” says Newman. It didn’t hurt that his resume boasts executive e-commerce and retail tech leadership dating back to the early 1990s.

"We’ve consistently asked our team to demonstrate a 15x return on our investment, and we’ve continued to meet or exceed that goal."

Evolving A 25-Year-Old Catalog Business
One of Newman’s top priorities at Office Depot is managing the evolution of Viking, a traditionally catalog-based B2B/B2C supplier of office supplies and furniture to European markets. In the print realm, Newman says Viking’s direct marketing pedigree is marked by a two-part success strategy: data driven optimization that enables explicit targeting of its catalogs to specific buyer personas and buyer-specific personalization of those catalogs. “Data optimization allows us to target individual customers with deals that are relevant to their purchase patterns,” says Newman. “It also empowers us to continuously test and learn about catalog performance, which further optimizes the targeted catalog effort.” Personalization — which he says can look as simple as printing a customer’s name in a catalog and offering promotions for relevant products on the anniversary of that customer’s first purchase — drives a consistent 20 percent increase in response rate in the catalog world, according to Newman.

A 90-day pilot run in the U.K. began during the first quarter of 2014, and Newman says the return on investment realized during the pilot was a multiple of the costs incurred. “We were skeptical that we would meet our fairly aggressive objectives, but the campaign setup support we received from Monetate brought to bear the benefits of the personalization toolset, our technical and marketing rampup was quick, and we actually exceeded the criteria we set,” says Newman. The company has now successfully completed a full-scale deployment of Monetate’s cloud-hosted applications across all of its Viking properties and is now extending this to the Office Depot Europe properties as well.

Specific Personalization Campaigns Prove Their Worth
Early into its engagement with Monetate, Viking leveraged the vendor’s toolset to personalize promotions using external weather data. “Market demands in the U.K. can be divided by weather, particularly when it’s cold and snowy in the north and warmer in the south,” says Newman. “We can leverage weather data to target northern customers with promotions on sidewalk grit and deicer, for instance, when and where it’s needed most.” Shipping cutoff dates are another external data source that feeds personalized promotions. “Some of our DCs have variable cutoff times based on the customer’s shopping address,” explains Newman. “Location awareness allows us to alert anonymous customers with a countdown to shipping cutoff times based on where they are, which generates a significant sales lift, particularly on time-sensitive consumables.”

Data analysis tools from Monetate have also driven cross-category penetration at Viking. It’s been able to turn customers who never before purchased ink and toner from Viking, for instance, into repeat customers in that category by identifying those customers, recognizing them when they visited the site, and promoting those products.

The more customers purchase, says Newman, the more detailed their buyer personas become, and the more relevant the offers get. “When we recognize a correlation between an individual customer, the brand or model of cartridge ink or toner they buy, and the frequency with which they buy it, for instance, we can continue to get that product in front of them at the right place and time to create measurable sales lift.” That gained intelligence drives even more cross-category penetration; when a new customer buys ink or toner, for instance, Viking can leverage Monetate’s data analysis tools to quite handily determine what printer that customer operates and expand on other complementary sales opportunities.

Functional Widgets Save Customer Time, Increase Conversion Rate
Customer intelligence is now empowering Viking to improve the site experience through personalization as well. As customers visit the site, Monetate allows the site to greet them with not just their most-purchased items, but also their most-used site features and functions, such as account status, as well. “We thought that because Viking customers are business users doing their jobs, productivity would be a good driver of customer satisfaction,” says Newman. “With Monetate’s tools, we were able to reduce their time on-site without negatively impacting conversion rate or average order value.” In fact, personalized widgets and targeted offers doubled click-through rates compared to users who hit the nonpersonalized home page, resulting in conversion rates that reached beyond 50 percent.

A Truly Customer-Centric Effort
In the early stages of the Monetate pilot and rollout, the project engineers associated with the initiative were broken up into four groups, each focused on products, acquisition and customer journey, user experience, and customer. Newman says early learning prompted the company to move quickly away from that model. “We saw some conflicting objectives there,” he says. “Our merchants wanted a product personalization team first and foremost, but we repositioned to a single team of four personalization engineers who were focused instead on customer intelligence, and we built product intelligence into the mix as a subservient element,” he says. “We developed new campaigns using that model and tested and validated them in the U.K., our most mature market for Monetate. When we achieved optimal results, only then did we push it out to other markets.” That model enabled the retailer to move very quickly through its European rollout, as success had been validated and a repeatable methodology had been developed for new markets to follow.

Now, two years into their engagement with Monetate, Office Depot and Viking continue to reap the rewards of intelligence-based personalization. “We’ve consistently asked our team to demonstrate a 15x return on our investment, and we’ve continued to meet or exceed that goal,” says Newman.